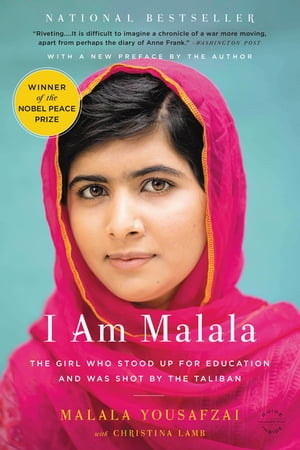 ＜p＞＜strong＞A MEMOIR BY THE YOUNGEST RECIPIENT OF THE NOBEL PEACE PRIZE＜/strong＞＜/p＞ ＜p＞＜strong＞As seen on Netflix with David Letterman＜/strong＞＜/p＞ ＜p＞"I come from a country that was created at midnight. When I almost died it was just after midday."＜/p＞ ＜p＞When the Taliban took control of the Swat Valley in Pakistan, one girl spoke out. Malala Yousafzai refused to be silenced and fought for her right to an education.＜/p＞ ＜p＞On Tuesday, October 9, 2012, when she was fifteen, she almost paid the ultimate price. She was shot in the head at point-blank range while riding the bus home from school, and few expected her to survive.＜/p＞ ＜p＞Instead, Malala's miraculous recovery has taken her on an extraordinary journey from a remote valley in northern Pakistan to the halls of the United Nations in New York. At sixteen, she became a global symbol of peaceful protest and the youngest nominee ever for the Nobel Peace Prize.＜/p＞ ＜p＞＜em＞I AM MALALA＜/em＞ is the remarkable tale of a family uprooted by global terrorism, of the fight for girls' education, of a father who, himself a school owner, championed and encouraged his daughter to write and attend school, and of brave parents who have a fierce love for their daughter in a society that prizes sons.＜/p＞ ＜p＞＜em＞I AM MALALA＜/em＞ will make you believe in the power of one person's voice to inspire change in the world.＜/p＞画面が切り替わりますので、しばらくお待ち下さい。 ※ご購入は、楽天kobo商品ページからお願いします。※切り替わらない場合は、こちら をクリックして下さい。 ※このページからは注文できません。